This is a trip report from Robert “Hoppy” Hopkins, Director of Exhibits that he took in early July.

Last week I went to the MAPS Museum in Canton, OH. to meet with the Executive Director, Kim Kovesci, Director of Training, Reed Kimble, Mike Dean, COO of the Friends of the Super Sabre, Laird Leavoy and several others involved with our Super Sabre Memorial Exhibit project. I am happy to report that we have enough memorabilia to complete the display but there are a very few items such as a pair of “water wings” we wore with our flight gear that are still needed.
Laird Leavoy drove from Texas to MAPS to deliver 45 custom made F-100 models with detailed painting that represents 45 different Hun Squadrons. He also brought a painting on velvet of two F-100A aircraft flying at night and a framed Viet Cong flag captured by the Aussies and given to his Dad Les Leavoy when he was commander of the 90 TFS at Bien Hoa in 1966. All squadron members signed the flag so some of you will have your signature on permanent display. Les Leavoy will be one of our “notable flyers”. He flew P-47’s in WWII, F-84’s in Korea and F-100’s in Vietnam. He was an F-100 squadron commander five times and could be considered the “Blue Collar’ notable flyer because of being a high school and Aviation Cadet graduate. Laird is a fine addition to be an advocate of the SSME project. He has also donated an ejection seat, new stick and throttle quadrant, instrument panel and $1,500 to MAPS and $1,000 to the Friends of the Super Sabre.
We all met to determine the approximate floor and wall layouts. It appears we’ll have room for all the display cabinets and mannequins needed to view our memorabilia. Steve DeGroote has offered to donate his remote control F-100 (on loan status) and it will be located on a level platform encased in plexiglass so viewers can see it close-up from all angles. The 16′ wing span 3D Hun coming out of the wall is being painted and mounted and looks great. No one else has anything like it. 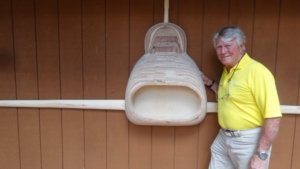 Stan “Butch” Swenson and his F-100 Model for the SSME

The SSS Toasting Cabinet will also be displayed, encased in plexiglass but we will still be able to use it as desired. George Day, Jr. has offered to let us have Bud Day’s Mess Dress jacket with miniature medals and also his Medal of Honor (on loan status) that I will personally drive from FL. to MAPS. The only thing we are not sure of is how to display in the space available is the probe and drogue hook-up. Hopefully, we’ll figure it out.
The biggest piece for display is still not yet available. It is the vertical stabilizer from a Thunderbird F-100C. The owner took me through his warehouses and showed me his collection of pieces of F-100’s and other military surplus items but would not commit to releasing it. I am still hopeful of him donating it to MAPS but nothing for sure, yet.
I want to thank the overwhelming number of you who have kindly donated so many of your special memorabilia items. Virtually every item I have requested has been donated along with many more things that were a surprise to me and museum officials. This exhibit is more complex than I imagined but we are hoping to complete the project by early next year. I guarantee it will be special.
All my best,
Hoppy
Super Sabre Memorial Exhibit UpdateRemote Control Hun
Scroll to top

Because these cookies are strictly necessary to deliver the website, refusing them will have impact how our site functions. You always can block or delete cookies by changing your browser settings and force blocking all cookies on this website. But this will always prompt you to accept/refuse cookies when revisiting our site.