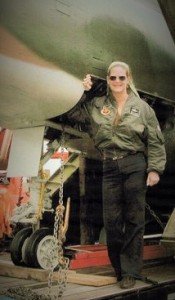 Anne’s father, Lt. Col. Paul N. Cohagan (1931-2005) flew all models of the F-100.  His favorite being the D (his ‘Lying Leprechaun’).  He was assigned to the 481st TFS, 27 TFW at Cannon AFB and later at Luke AFB.  He was a test pilot for the 27th and served a tour in Vietnam in 1965 finishing his career in 1972.  Anne is dedicated to preserving the history of the F-100 and in particular by restoring an F-100A rescued from Lackland AFB and dedicating it to the memory of her Father at the Historic Aviation Memorial Museum in Tyler TX.  See the Palestine-Herald Press release for details of the dedication.

Anne received the Four Chaplains Legion of Honor award from the Brazos Valley chapter of the Vietnam Veterans of America organization in Palestine, TX in July, 2008 for her participation in Veterans affairs in the area along with playing taps at local funerals when applicable.  See the Palestine-Herald Press release for details.  Anne worked for Sam Walton for 22 years and she and her husband have one son Will.  Anne was on the board of directors of the local YMCA, several city/county boards, and past President of the Museum for East TX Culture.  She created the Veteran’s Historic Education Center in Palestine and brought one of the traveling Vietnam Walls to town along with several visits from the Collings Foundation that now houses an F-100F with Anne’s prodding.  She and her husband Joe Coleman built the Anderson County Veterans Service Center to provide for service officers as advocates to assist veterans in navigating their claims with the Veterans Administration.  They also maintain a shelter for homeless Veterans.

The Friends of the Super Sabre (FSS) came about because of Anne’s devotion to preserving the history of the F-100 Super Sabre.  During one of the Super Sabre Society’s reunions she solicited help from LTC Robert Dunham who became a co-founder and the FSS Chief of Operations.

Anne laments that, ‘her lifelong struggle with kidney disease may have kept me out of the Air Force but I’ll always be a fighter pilots daughter…’ 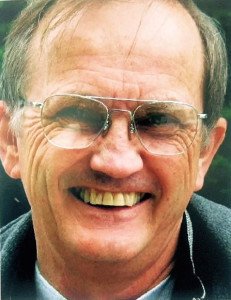 LTC. Dunham was better known as Ranger Bob to his friends.  Bob was born in Montgomery, AL and graduated from the Air Force Academy in 1966 with a Civil Engineering degree.

He next joined TWA and American Airlines and flew the four different aircraft.  It was during this time that he met Pam who he later married.

Bob coined the phrase “Remembered in Time – Not Lost in Time” as a goal and motto in preserving the history of the F-100 Super Sabre.

Because these cookies are strictly necessary to deliver the website, refuseing them will have impact how our site functions. You always can block or delete cookies by changing your browser settings and force blocking all cookies on this website. But this will always prompt you to accept/refuse cookies when revisiting our site.