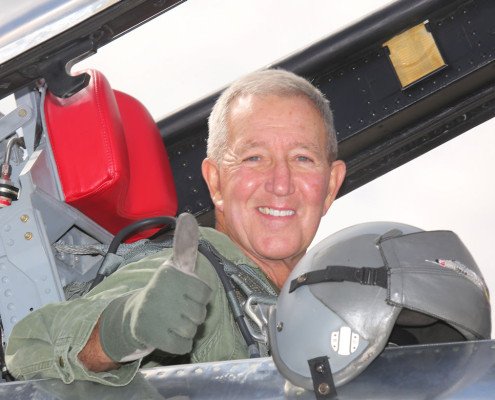 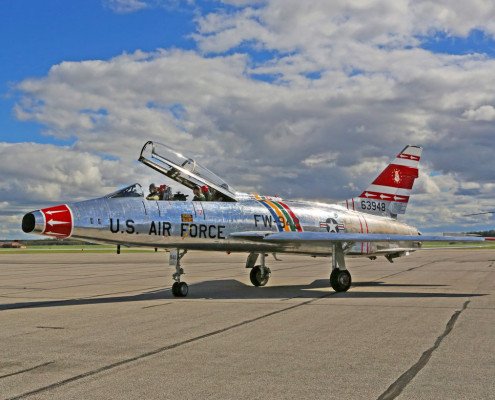 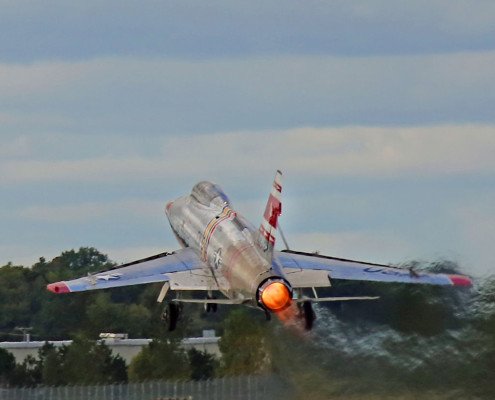 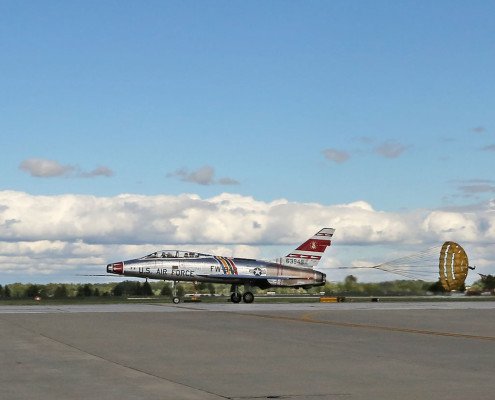 Yesterday, I rode in the F-100 for the first time in 38 years. I’m pleased to report that our “iron mistress” is still as fast, agile, powerful and beautiful as she was when you flew her. It was like going back in time to climb the ladder, strap in, see the same old round dials (even the LABS instrument), grip the familiar stick handle with the same buttons and trigger, hear the whine of the MA1A and MD-3 “huffer and generator, observe hand signals between the pilot, Dean Cutshall and the ground crew, then see the lights come on and the needles move clockwise as the big old J-57 comes to life. It all sounds and smells the same and I began to shed some of my 76 years and go back in time. Memories and pride filled my mind as the after start checks were completed, safety pins and then chocks were removed and the big old Hun started to move. Taxiing out, Dean lowered the canopy down to the top of the front windscreen and I felt the plane give it’s usual wiggles as we made our way to the takeoff runway. Ft. Wayne Intl. Airport is not very busy but it does have an A-10 Guard wing and a commercial terminal. The F-100 is the star of the airport and as such gets clearances to do almost anything Dean requests. Now the canopy closes and we take the runway. As usual, the throttle moves very slowly through the lower RPM’s to prevent compressor stalls, then moves rapidly to full military power. I can feel Dean’s feet putting pressure on the brake pedals to hold us while we check RPM, EGT and EPR. All’s good and off we go. The old Hun’s forward movement presses me back in the seat and then, throttle outboard and the old kick in the pants A/B lights and we really start to accelerate. Still the world’s fastest tricycle, we lift off at about 180 kts., suck up the gear and flaps and come out of burner at 300 kts. Now you have to try to stay at 250 kts below 10,000 ft but no one says anything because they know you are an F-100 and you need and love the speed. He let me fly the plane a fair amount and I have to admit the old sensitive roll tendency is still there. At first I was gentle and cautious as I tried to regain a feel for the controls but after a few minutes things started to come back. After a few aileron rolls, heading and altitude changes we made an afterburner pass at some little airport and then returned to Ft. Wayne Intl. for more low approaches they called “options”. I guess that means you can land or go around as you choose. We chose to go around about five times. Dean Cutshall is a familiar person around here and they give him and the Hun permission to beat up the field like I would not have imagined. For the tower personnel it’s like having their own private airshow. I got to make three low passes, one of them in burner at 450 kts., then up into a closed pattern. Now I was 30 years old again in my prime, sweating and grinning in my oxygen mask. All too soon, though, we requested a fullstop. Dean made a beautiful landing, popped the drag chute and we gradually slowed to canopy raising speed. The cool fresh air felt good and when I undid my mask I smiled and knew I was where I longed to be all these years. What a ride. We were (and still are) a lucky bunch of guys to have flown this magnificent airplane on a daily basis for years.

I’ll have lots of pictures and videos of the plane in a few days that I’ll get on the SSS website for you. I can’t say enough about how thrilling the ride was or what a gentleman and good pilot Dean Cutshall is. This was one of the very special occasions in my life

Want to join the discussion?
Feel free to contribute!

This site uses Akismet to reduce spam. Learn how your comment data is processed.

Because these cookies are strictly necessary to deliver the website, refuseing them will have impact how our site functions. You always can block or delete cookies by changing your browser settings and force blocking all cookies on this website. But this will always prompt you to accept/refuse cookies when revisiting our site.